This week, I thought that instead of just harping on some of the do’s and don’ts of composition, I would show you what I did with a Canon DSLR (Digital Single Lens Reflex).  This can also be accomplished with a point and shoot camera or even a cell phone one.

In the past, I have talked about thinking before shooting.  What do you want in the image?  What is your subject matter?  What “feel” do you want the viewer to have?  What’s the story?  The next step is to take the image, of course.  So….

I went for a walk on a  spring day.  It was slightly cloudy but the sun was coming through enough so that a flash was not required (I prefer non-flash images, anyway).  As I walked down my city sidewalk, my head was on a swivel, looking for that one image that yelled “spring has arrived!”  Most people tend to look toward the ground for fresh greenery just breaking ground after a long winter.  Me?  Well, there are days when getting low to the ground for a good shot just aren’t in the cards!  As it was this particular day…

So, heads up and full speed ahead.  Literally.  My eyes were on the trees.  Unfortunately, they didn’t seem to be quite ready for spring.  The branches appeared to be bare.  No apparent budding happening yet.  At least it seemed that way so I changed my though process (I mentioned this in a previous blog. Don’t be afraid to change your mind when out on a photo jaunt).  My new thought was to capture something that reflected the last of winter, like a brown leaf or a fallen acorn left over from last year.  And voila!  I found what looked like an old brown tree flower.

It looked so lonesome on the brown branch.  As if it had weathered the rough winter and still hung on for good measure.  The petals were still nice and crisp.  The last of the fall tree flowers.  That was my thought, anyway, when I looked at it.  (Pretty sure there are no such things as Fall tree flowers but my brain doesn’t always accept common sense when I am out with my camera!)

My thought process; focus on the forefront one and keep the farther one out of focus because the back one did not have the nice flowery look to it.  The petals seemed to be bent backward from the center (you can kind of see it in the picture) and the sun highlighted them a bit.  Also, I wanted the background very blurry because it was distracting with fencing and buildings.

Since I was using my DSLR on manual mode, I was able to play with a few settings (ISO, F-stop, and speed) to get what I wanted.  My lens was a 18-135mm zoomed to about 64mm.  We will get more into these numbers and how to play with them in another blog for those of you who have the ability to do it with your particular camera.  But most digital point and shoot cameras as well as telephone cameras have the ability to zoom, so you should be able to get somewhat the same effect as I did.

After finally settling on the image I “envisioned” as the final product, I downloaded it to my computer.  Mind you, I took about 30 images from different angles before I decided this is the one that captured what I wanted to say.  The digital age is a wonderful thing for photography!  No more wasting film or paying for processing of unwanted images!

Now it was time to check out all the details of the petals.  This is when I received my shock…this was not a flower at all.  It was a tree bud of sorts.  The so called-petals were protecting the seeds that the tree would eventually drop.  Since I tend to be very focused when I look through the viewfinder attempting to get the “framing” the way I want, it means sometimes I miss some of the finer details that the camera will pick up.  My focus was on the “flower” and not what it was hiding.

In the middle of the bud are several seeds.  You can seem them in the image below. I cropped the image so that you could see what I missed!   It’s probably one of my favorites of bud images as I have never seen one like it before or since. The bud almost seems to look like a face and is sticking its tongue out at me (that’s just my imagination running wild!). 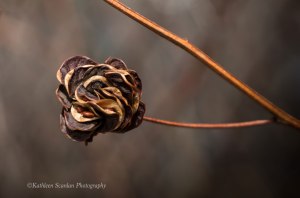 As you can see, only the bud shows detail and the branches are out of focus.  All attention is on the “petals” and when you look closely, you see the seeds.  This is what I had talked about in previous blogs about composition.  When someone looks at your image, what draws them into it?  Or is it “flat”, meaning that what you see is what you get.  Had I simply shot this piece without zooming in, the background would have detracted from the bud.  Everything around it would have been as sharp as the bud and the person looking at the image would probably miss the seeds all together.

But with focusing and zooming in on my subject (and a few minor adjustments), the viewer now sees the detail and is drawn into the bud by the white petal that supports the seeds.  My subject matter stands out without anything to impede on the visual aspect of it.  The out-of-focus bud in the background lets the viewer know that this is some kind of tree or bush and not a ground flower.  I purposely placed the subject in the lower right quadrant of the frame so that the viewer would see it first and the lines (branches) lead into the image to show that there are other ones like it on this tree. It would have been nice to have had the sharper bud in the upper left quadrant with the “lines” leading to it but mother nature decided that was not to be.  Sometimes you just have to go with what you got. And yes, this is the actual color of the bud.  Definitely not a spring color!

So, the next time you head out with your camera, look around.  Try getting closer to your subject.  You never know just what your camera will capture.  The human eye adjusts and takes in tons of information.  It’s the camera that actually captures what you really see.  Grab your camera and go!