There is quite a conversation going on around the internet regarding photography and “pure” photography. Strange, but I never thought of it that way, even back in the “film” days. But apparently, with the onslaught of programs that help to enhance the original image from the camera, (some cameras have built in programs for that), the cosmic question has become “which is better? Pure photography (downloading and accepting whatever the camera captures, good or bad)? Or, images that have been adjusted in post work programs?  To me, the better question is; what is it that you want to accomplish with your image?

My favorite photographer is Ansel Adams.  You can still see his landscape photography everywhere.  He is known for capturing the landmarks and landscapes of the United States and is emulated by photographers worldwide.  Those who really don’t know him, believe his images are simply what he captured in camera.  The reality is, he did his best work in the darkroom.  Mr. Adams knew what he wanted his final products to look like and worked on his images until they reflected his “vision”.  His work, comprising of the National Parks of the United States, still capture the essence of the forests, rock formations, and the American landscape to this day.

I have read blogs as well as discussions on Facebook and other areas of the internet regarding this issue and people on both sides of the fence are very determined to convince each other that they are right. Just like politics…  I too would love to shoot a picture and have the camera do all the work for me (provided the camera knows exactly what I am striving for in the final product).  There are times when it is spot on but more times than not, the camera catches a dark area that my eye did not “see” or a glare which could have been be caused by the sun hitting the lens.  Or it reads the light as being too bright behind the subject matter because it registers all the light coming into the lens and adjusts for it, and the subject matter becomes a “shadow” in the image and the sky or background come out perfect with beautiful blue and white skies.

Below is an image I caught with my camera.  Using my manual mode, I made adjustments so that the sky wasn’t blown out and the foreground didn’t come out too dark.  To me, its a “blah” picture.  Not exactly what I actually saw that day. 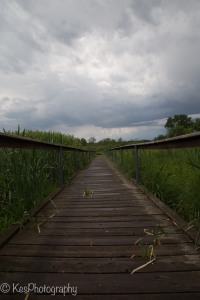 This is what I actually saw.  Had to do some post work to pull out the beautiful stormy sky, the saturated colors that pop on overcast days, and added a bit of clarity to pull out more definition of the pathway.  My final image is below.  In this one I can actually see the beauty and “feel” the storm rolling in.  Which one do you like? 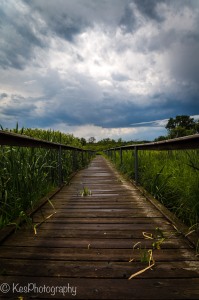 You can shoot in auto mode and have beautiful images to show off.  But there is a limit to what the auto mode can do, too.  Have you ever shot an image and then when you downloaded it, the final image wasn’t quite right? The shadows were too deep or or the sky and clouds just were a white blur?  But, your eye didn’t see it that way when you initially took the shot.  Your brain saw the beautiful blue sky with the white, fluffy clouds passing by, and the colors were vibrant.  Our brains make the adjustment so quickly, we don’t even notice it.  Our eyes automatically make subtle changes so we “see” everything in its splendor.  So, until the camera has a “brain” that can catch up with the many variables the human eye adjusts for automatically, I can proudly say I will never be a “purist”.

Hi Everyone! I have finally entered the world of Blogging that everyone else has been in for years! Sometimes it takes time for those of us who were not born into the computer age to finally figure out how to use the “techy” stuff.

After I retired from my second love (where I had to make money to help raise a family), I jumped back into photography only to find myself completely perplexed and confused with all the new technology in this arena. Although I love photography and all that it entails, I was lost amid all the new digital cameras, post work programs, and information available on the internet. Half the time, I would read an article and still be lost as I don’t have a computer or techy mindset. All I wanted was an answer to a simple question in PLAIN english. And so, a blog is born…

In future blogs, which I plan on keeping it short and to the point (at least that’s the plan. Who wants to read long, run-on articles all the time?), I will share what I learn as I move on with my photography. Currently, I use both Photoshop CC and Lightroom CC for my filing and post-work (boy, were they a struggle to learn for me!).

I invite you to join me on my journey into the world of digital photography as I find my way around . Future blogs will contain helpful hints on composition, framing, and post -work, all written in a plain, down to earth language.